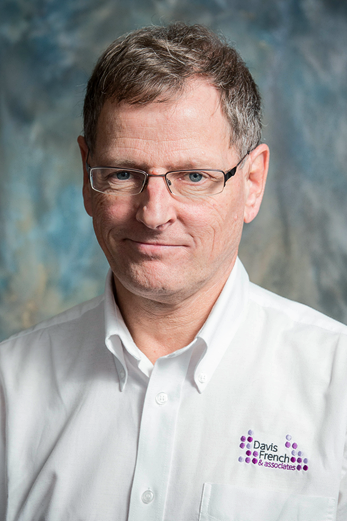 After gaining a BSc in Metallurgy Greg went onto study Chemical Metallurgy at both MSc and PhD levels. He investigated the nature of reactions between oxidizing & reducing gases on various metals and oxides.

After completing his studies Greg spent time in production engineering at Rolls-Royce Nuclear Division then moved into industrial research and development at Chloride Batteries then Lucas Aerospace.

In 1987 Greg moved into the world of damage management with Imbach, (now BELFOR), where he specialized in the decontamination of electrical, electronic and mechanical equipment as well as commercial buildings. Using his specialist chemical knowledge, he developed the technique for using ion selective electrodes, (ICE), to analyze the extent and severity of oxidizing gas phase chloride contamination reactions during fires and later went onto introduce ion chromatography to study the full spectrum of ionic contaminants produced in fires and to analyze salts movement in rising damp and to identify moisture sources in water ingress situations. Following his involvement in a number of high-profile fires in the late 1990s involving the combustion of polychlorinated bi-phenols, (PCBs), Greg pioneered the use of gas chromatography/mass spectrometry, (GC/MS), techniques to study the highly toxic fire contaminants; polycyclic aromatic hydrocarbons, (PAHs), dioxins, (PCDD), and furans, (PCDF).

Greg has worked on hundreds of commercial losses following fires, floods, escapes of water, hurricanes and explosions in the UK and overseas and managed the decontamination and restoration of everything from laptops to power stations.

Greg was Managing Director of BELFOR UK between 1995 and 2007 and was responsible for taking the business from a single site commercial claims only operation to a multi-million turnover, multi-site, full spectrum operation delivering decontamination and restoration services in both the residential and commercial claims sectors to insurers and loss adjusters. Between 2003 – 2005 Greg was also Chief Operations Officer for BELFOR Europe with responsibility for operations in 13 European countries.

In 2007 Greg realized he needed a new challenge and recognizing a gap in the market he set up Davis French & Associates Ltd, (DFA), to provide independent damage assessment consultancy services to the insurance claims sector. In 2012 Greg added Business Recovery Project Management as a core competence of DFA’s services.

In 2017 Greg was instrumental in setting-up the UK’s first laboratory dedicated to the identification and quantification of mould contamination. Using innovative surface and air sampling techniques along with 3rd generation DNA extraction and sequencing techniques DFA are now able to provide clients with highly detailed Reports on the microbiological environment within a property.

In 1999 Greg was one of the ‘founding fathers’ of the British Damage Management Association, (BDMA), and currently sits on the Executive representing Commercial Technicians.